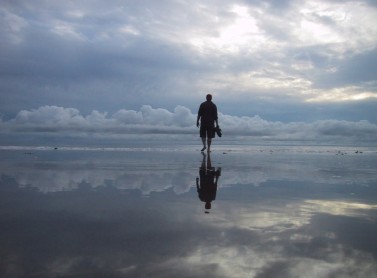 But that’s a good thing.

And that’s always a good thing.

According to the dictionary, a voyage is a long journey, usually by sea or space.

So walking on water for an extended period of time qualifies as a voyage, right?

The last sixteen months or so of my life have been like nothing I’ve experienced before. I’m a bit of a risk-taker by nature–at least in some areas–but as I’ve gotten a little (ahem) older, those BIG leaps have become a LOT scarier. Not only do I understand the potential cost in much more concrete terms, but security (or at least the illusion of it) matters a lot more than it did when I was in my 20’s and 30’s–or even 40’s. And yes, I know my only real security is in Jesus. We all know that.

At least we do until we have to actually live that reality in ways that are extremely uncomfortable and costly.

Yet the “cost” pales compared to the amazing glimpses of His glory I’ve caught along the way.  Not to mention the amazing demonstrations  of His faithfulness. I’ve been waaaay out there on those waves for a while now. So far out that I don’t have a single prayer of getting to the other side apart from a literal miracle (or two or three). Despite that, I’ve been at peace. More often than not, I’ve even been able to enjoy the process.

Because I know Who invited me out onto the waves to begin with. And when I remember that–when I believe that–I’m confident. And, in confident trust, I’ll just keep right on dancing out on those waves.

I haven’t quite reached the other side, but after nearly a year and a half of “unfolding” it’s starting to come into view.  And I’m blown away by His goodness. No, really.  Like an Ephesians 3:20 kind of blown away.  I know He’s good, but sometimes I just can’t believe He’s that good.

Sometimes I can’t believe He’s that good–to me.

So here I am–standing on the brink of a miracle (or two or three). No longer questioning. No longer doubting (at least for the moment). Just believing Him. And when you finally get to that point,  you realize the real miracle has been occurring all along:

And always–He is with me on the voyage.

You’re afraid,
But you can hear adventure calling
There’s a rush
Of adrenaline to your bones
What you make
Of this moment changes everything

I am the wind in your sails

The wind is high. But the pressure’s off. He’ll send the rain wherever we end up.

I have a feeling “wherever” will be worth the wait.

8 thoughts on “The Voyage”