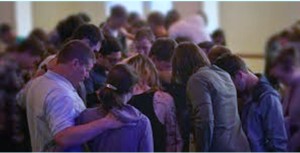 I think I came out of the womb praying. I can’t remember a time I didn’t talk to God all day long. In fact, I’ve often said praying is like breathing to me.

I still say that … because it still is. Prayer is a priceless and precious means of communion and communication with God.

But corporate prayer has gotten a bit more complicated for me over the years. I used to run to every prayer gathering I could find. I hosted a weekly prayer meeting in my home for years and years. I’ve led countless prayer meetings and have led prayer teams both locally and globally. Heck, I even started a House of Prayer! I used to say a prayer meeting was my idea of a party. But I don’t say that anymore …

Because most of the time it isn’t.

Most of the time it isn’t, because I’ve been in one too many (well, okay, dozens too many) prayer gatherings where …

Really, there was little agreement.

And prayer without agreement—with God and with each other—is just a bunch of people getting together to say words.

That kind of prayer makes me tired.

It makes me sad because it distorts something priceless and precious. Sometimes the distortion is rather innocuous—no worse than a boring and minimally effective use of time. But at its worst (when there is the wrong kind of agreement), it can increase the enemy’s influence by creating strongholds of manipulation and control. (Which, when you get right down to it, is witchcraft—and in case you’re not aware, that is not a good thing at all.)

But thankfully that isn’t always the story. Thankfully, sometimes a prayer meeting is still a party.

It still is a party …

– When no one has to perform or meet someone else’s expectations
– When those gathered let things flow in an organic and unforced way
– When we take the time to listen for the Father’s heart then join Him in what He’s doing
– When we keep our focus on the victory that has already been won
– When joy and thanksgiving are at the center of our prayers
– When we have a (far) higher value for praising Him, thanking Him, and worshiping Him than we do in keeping a set agenda or schedule

Even when our own plans and purposes are really good and really important (and often they are).

Just so you know, I do realize God has wired us all uniquely and that we’re all at different places in our journey. There are expressions of prayer and intercession (particularly corporately) that may not be right for me at this point, that may be exactly what He is asking someone else to do. I bless that and I honor that …

I just don’t necessarily want to be a part of it.

Honestly, what makes me the saddest is I feel like maybe I have lost something along the way. Although I don’t currently have much (if any) capacity for off-the-mark expressions of corporate prayer, I do miss the opportunity for more of the good stuff. Because sometimes the prayer meetings that started out a bit off–kilter, found their stride. Sometimes prayers that started out lacking in faith, became energized by the faith-Giver. Sometimes the Holy Spirit joined the very driest and deadest prayer meetings and turned them into a rip-roaring blaze of passion for His name.

Here’s the thing, I very much understand and HIGHLY value persevering in prayer. I understand pressing in and I understand there are times we need to pray through to breakthrough. I get it. Really, I do. In fact, I’ve pretty much spent my life getting it!

But I also understand times and seasons. And I’m not in a “corporate intercession” season right now—at least not in a traditional sense.

Of course, that does not mean I don’t still value intercession. I do still pray—a lot—and often with others. What it does mean is that I don’t usually get excited to run off to another prayer meeting. In fact, I often have an aversion to the very idea. And, again, that makes me downright sad.

But that’s just me. That’s just me processing my convoluted and complicated thoughts on corporate prayer. Your thoughts may be completely different, and that is okay. I haven’t sorted it all out. But one thing I do know for sure  …

I’ll just keep right on talking to Him about it  🙂

7 thoughts on “My Convoluted and Complicated Thoughts on Corporate Prayer”