There are a few stories in the Bible that bug me.

Hezekiah’s story is one of them. Hezekiah was King of Judah during the time of the prophet Isaiah. He was a good king. In fact, according to 2 Chronicles 31:20, Hezekiah did “what was good and right and faithful before the LORD his God.”

But that doesn’t mean he got everything right.

In 2 Kings chapter 20 we find Hezekiah sick and about to die, but he turns his face to the Lord. God hears his cry and Hezekiah is given an additional fifteen years to live.

So far so good, right? And it is all good until you get near the end of the chapter.  For some reason, Hezekiah thinks it is a good idea to invite the King of Babylon into his palace to show off all his riches. After he does this, Isaiah announces to Hezekiah that everything he just showed the King of Babylon will eventually be carted off to Babylon along with some of the king’s own descendants.

Sounds like a set up for Hezekiah to turn his face again toward the Lord to cry out for mercy, right?

But that isn’t what happened. Instead, after Isaiah’s declaration, this is Hezekiah’s reaction:

“The word of the Lord you have spoken is good,” Hezekiah replied. For he thought, “Will there not be peace and security in my lifetime?” -2 Kings 20:19 (emphasis mine)

Wow. Really? As long as I’m good for the moment, the heck with the generations to come? Yeah, you could say this bugs me—more than a little! 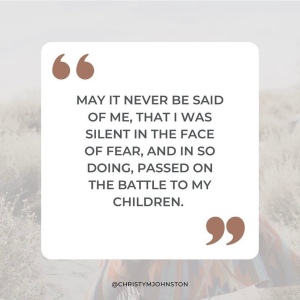 Recently I saw a meme with this quote from Christy Johnston: “May it never be said of me that I was silent in the face of fear, and in so doing, passed the battle on to my children.”

Amen. That is the cry of my own heart and why Hezeziah’s reaction disturbs me so deeply.  And, sadly, Hezekiah’s reaction is exactly the reaction of many in the church today.

Instead of actively contending for God’s best for future generations, many have remained silent as they try to cling to whatever sense of normalcy and comfort they can find for their own lives—completely missing what their complacency and ignorance will cost generations to come.

To a degree, I get it. Because of the drama of the past year or two, people have wanted the noise to stop. But darkness is never satisfied with apathy—it just keeps devouring. Both the “rapture-ready escapism” and “gospel of good feels” that long ago invaded the church have made us ripe for the path of least resistance. Many are ill-equipped to stand in the midst of conflict—let alone even mild persecution (fear of being canceled, anyone?)—so instead we go along with whatever represents the easiest path for the moment.

But that’s not the path Jesus modeled.

Jesus Himself is the Prince of peace, but when what the world calls peace is really complacency that completely ignores the clash of light and darkness raging all around us, He doesn’t come to bring peace …

A sword that divides soul and spirit, joints and marrow; and judges the thoughts and attitudes of the heart (see Hebrews 4:12).

Church, this is not a time to waver between two opinions. The writing was on the wall in Hezekiah’s time, and for anyone with eyes to see, it is most certainly there in ours. The enemy of our souls is attempting to carry our children off into captivity, just as Israel’s children were carried off after Hezekiah’s reign. When Hezekiah heard what was happening and could have stood before the Lord on behalf of the next generation… HE DID NOTHING.

And the next generation, as well as several beyond, suffered greatly.

Would the outcome have changed if Hezekiah had responded differently? We’ll never know. But the real question is this …

Will the outcome change if we respond differently?

“May it never be said of me that I was silent in the face of fear and in so doing, passed the battle on to my children.”

God, thank you for the peace and protection You have provided in my lifetime, but may I NEVER grow complacent in that blessing. Instead, please give me the grace to BOLDLY contend for Your blessing to endure from generation to generation. ~Amen.